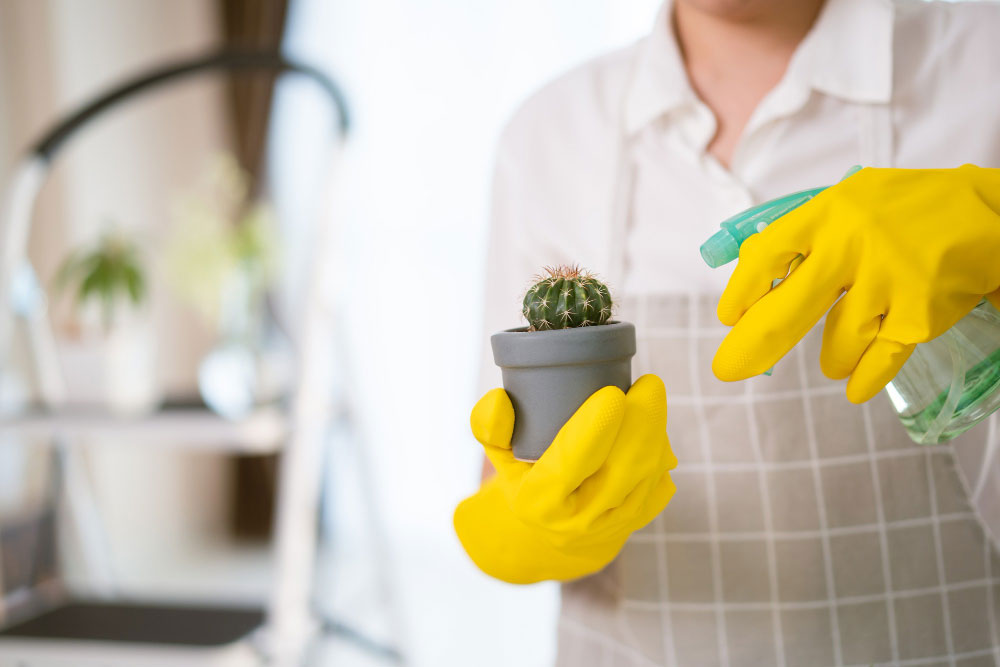 Choosing the right water type for your plant is a hassle. On top of that, you get confused about the fertilizer options. But for some reason, you don’t get motivated to use chemical ones.

So you searched for some alternatives to fertilizing. One name popped up, which is hydrogen peroxide.

But you’re not sure if they can be used on succulents and cactus.

So you’re searching, is hydrogen peroxide good for succulents and cactus?

Well, it depends. If you add rainwater that contains hydrogen peroxide, it’s completely fine. But if you use store-bought ones, you have to be careful. Only use it if that’s 3% concentrated and diluted with water. Otherwise, your plant might be negatively affected.

Now there’s a lot of information regarding this. To know all of them, read till the end.

First of all, let’s start with what hydrogen peroxide is. Well, it is a component similar to water. But it has one extra oxygen atom.

As an indoor gardener, you might have heard about the benefits of rainwater. Pro gardeners suggest using rainwater instead of tap water in plants. Because tap water contains chlorine, which is harmful to your plants.

On the other hand, hydrogen peroxide mixed water does wonders for your plant. But here’s a catch. It will only do good if applied in the right amount.

Hydrogen peroxide is found in three different percentages. They are 3%, 6%, and 35%. So if you want healthy growth for the plant, go for 3%.

Because succulent or cactus doesn’t do well at a higher percentage. The hydrogen peroxide found in-store is really concentrated. If you use it without diluting, the plants will die. Because it will burn the plants.

When these two criteria are met, hydrogen peroxide is safe to use. The plants will have several benefits from using it. To know more about the benefits, scroll down.

What Hydrogen Peroxide Does to Your Plants?-Benefits!

H2O2 is beneficial when it comes to succulent and cactus health. So let’s see what’s all the hype about-

You need a soil mixture with perlite, potting soil, and coarse sand. But that’s only the soil preparation. To give added nutrients, you’ll have to consider fertilizers for the plant.

In that case, using hydrogen peroxide will help in restoring the soil health for a while.

Because of the extra oxygen in it, it’ll increase the aeration of the soil. But that’s not a permanent fix to poor drainage soil. You’ll have to switch to perfect soil for your succulent and cactus eventually.

Apart from treating the soil, it treats rotten roots as well. So first let’s spread some light on the rotten root part.

As you may know that both succulent and cactus have a high capacity to hold water. Their roots store water for up to a month or more. But unknowingly, you may have overwatered these plants. Thus, the roots remain in standing water.

As a result, it starts to rot. This certainly takes the plant to its death if it remains untreated.

So using hydrogen peroxide will treat the roots.

The extra oxygen supply in H2O2 will improve plant health. You may have gone on a vacation leaving your cactus and succulents. After returning, the plants may seem dull. You’ll also see that the plants have lost nourishment. And it may have started to lose the vibrancy.

It’s because you’ve ignored caring for succulents while on vacation.

In that case, you can use hydrogen peroxide twice a month. Just dilute it with water and apply it to your succulents.

Then the plants will get the oxygen and thrive. Even the overall root health will improve due to the usage.

With it, you’ll have to maintain proper watering and care guidelines. For example, you’ll have water succulents only when the soil is dry. That’s about 14-15 days in summer. So maintain these guidelines as well.

Acts As A Fertilizer

Whenever we hear fertilizer, chemical ones roam around our minds. Because that’s what people usually use for their plants.

But succulents and cactus are slightly different from other plants. They don’t need chemical fertilizers. Rather they need something that helps them with natural growth.

For example, as we mentioned earlier that H2O2 is present in rainwater. So adding it will give the plants a rain-like feel. Hydrogen peroxide also makes the soil acidic.

Both succulent and cactus love acidic soil. Because when the soil is in acidic pH, they can suck nutrients better from the soil. So it will be the best non-chemical fertilizer for them.

Another problem that cactus and succulents face is infection. Most of the time the soil or sand is pre-infected by bacterias. So when you plant on the affected soil, your plant gets affected too.

Or sometimes, the leaves remain wet for a longer period. And then fungus starts to build on the wet surface.

So whether it’s a bacterial or fungal infection, H2O2 will treat that.

You may not see instant results. But if you continue using it, the infection will be gone. And the plant will again be healthy and well.

How to Use Hydrogen Peroxide?-Proper Guideline!

You might be overwhelmed with all the benefits of H2O2. And you’re now eager to know how to use it properly. So we’ve given you the guideline just below.

First, you’ll have to trim the affected part of the root. Now you might be wondering what to use for cutting the roots.

Here are a few you can look over, in case you’re confused about where to get one:

Now you can cut off the damaged roots. Then wait for a week.

Next, it’s time to re-pot the plant. Once you’re done, water the plants with the solution every week. This will stop further root rotting.

Sometimes you’ll see fungus spreading on the upper leaves of the succulent. But you can stop this infection by using H2O2. For that, you have to take 1-liter water. And then add 4 tablespoons of hydrogen peroxide.

Now mix them well and take in an empty spray bottle. Then spray it on the infected leaves.

Continue this procedure until the fungus is gone.

To Use As A Fertilizer

Now mix it with 1-liter water. Then pour it into the soil. Continue pouring the water until it gets out through the drainage holes.

Do this every 4-6 weeks during summer. This way, it will help the plant to grow healthy and fine.

What Are The Factors to Look for While Using Hydrogen Peroxide?

Hydrogen peroxide is good for your plants with no doubt. But you still need to be cautious while using it.

If you have pets, you have to keep the solution out of their reach. Because if they consume it, you’ll have to hospitalize them immediately.

Store H2O2 in an airtight bottle and keep it in a dark place.

Lastly, never heat the water that contains H2O2 because that may lead to explosions. So always mix it with normal room temperature water.

If you maintain these factors, then hydrogen peroxide will be good for your plants.

Question: Can hydrogen peroxide be used as a pesticide?

Answer: Yes, it can be used as a pesticide. But you have to take 4 tablespoons of 3% H2O2. Mix it with 1 liter of water, then spray over the bugs. And the bugs will die.

Question: Can I touch hydrogen peroxide with bare hands?

Answer: Well, hydrogen peroxide is highly concentrated. If you have sensitive skin, then your skin will burn in touch with H2O2. So use rubber and waterproof gloves to protect your hands.

Question: Can I use non-diluted hydrogen peroxide on the cactus?

Answer: No, you can’t. Because hydrogen peroxide’s concentrated form will burn the plant instantly. Then the plant will turn brownish and die.

You’ve got the gist of this article. Because we’ve answered whether it’s good to use hydrogen peroxide for succulents & cactus. Hope you got all the necessary information related to this.

But in case any queries arise, just comment below.