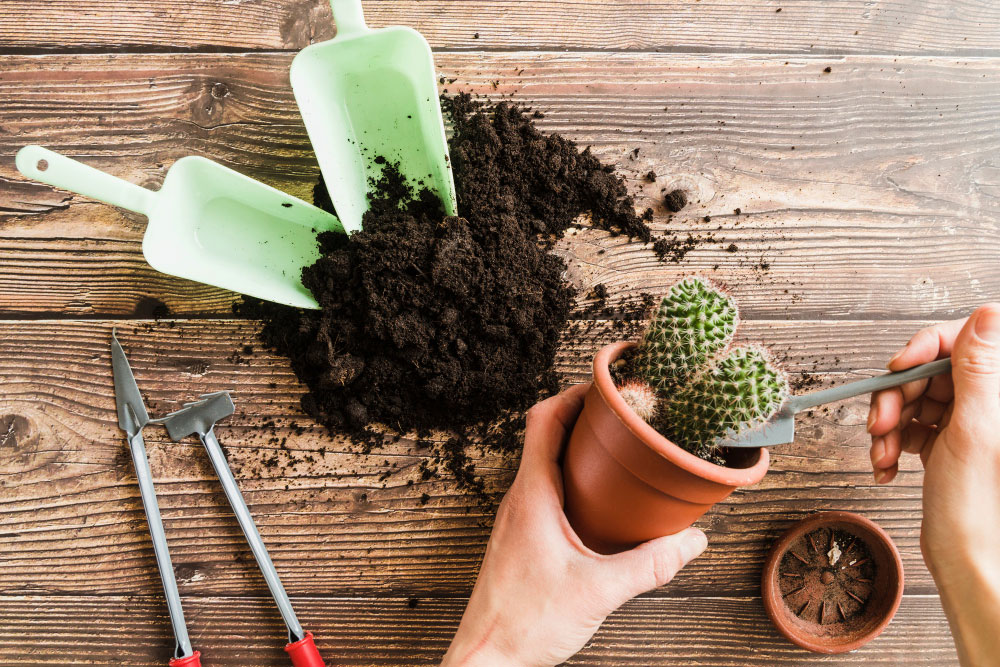 You may have varieties of plants in your garden. But the caring process for all of them is not the same.

So it can become a hassle at times. Especially when it comes to choosing the soil for your plant.

The problem is more severe when you have confusion regarding succulents and cactus. Because they’re different from other plants.

So you’re wondering, can you use garden soil for succulents and cactus?

Well, people actually apply gardening soil to these plants. But that’s an unwise choice. Because that’s not the proper soil for succulents and cactus. You’ll need a special potting soil mixture, especially for these plants. That soil needs to maintain the proper ratio between potting soil, sand, and perlite.

We’ve also mentioned the secret recipe of soil later in the article. So be with us until we reveal that.

Can You Use Garden Soil for Succulents & Cactus?-Why Not? 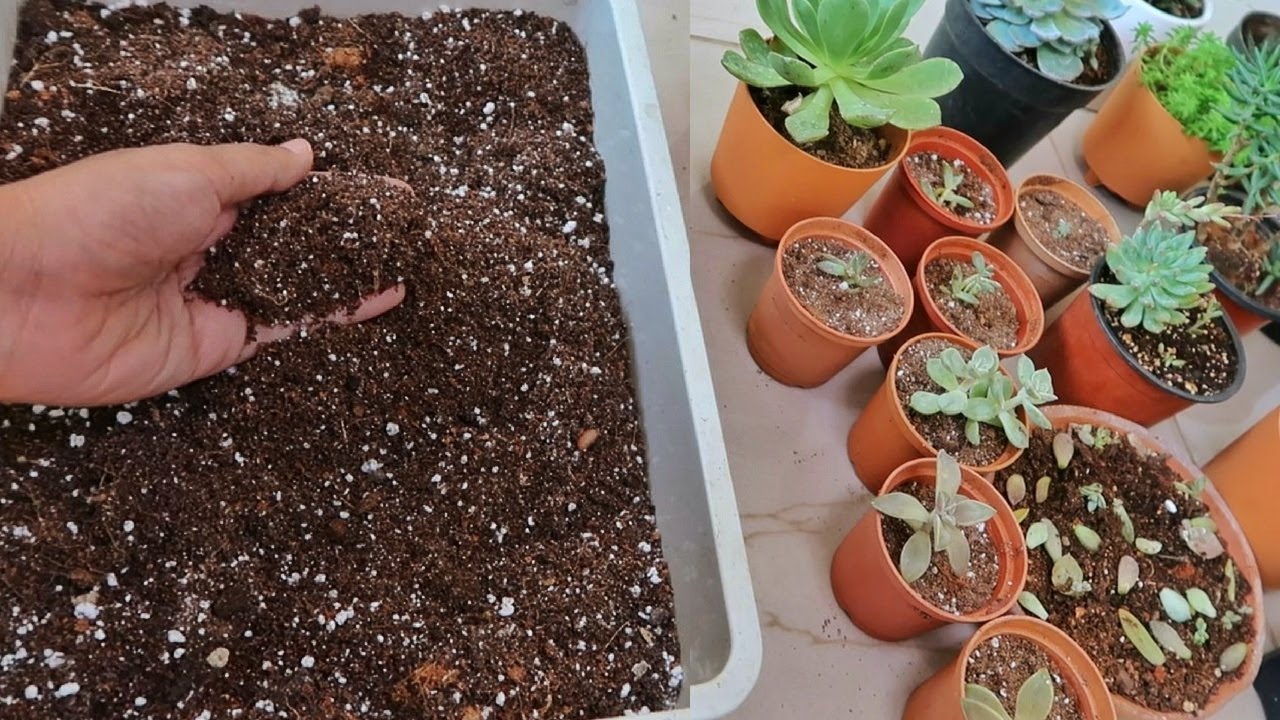 Well, a lot of people use normal garden soil for succulents & cactus. But that isn’t ideal for them.

Whereas, you can use garden soil for almost any other indoor or outdoor plant. Succulent and cactus have slightly different needs.

The similarity between these two plants is that they grow in low watering situations. Because in the deserts or barren mountains, they’ve low seasonal rainfall. So these plants are used to that.

For that reason, when you plant them indoors, the main consideration is the soil.

Garden soil is not a good choice for these plants. Because its soil particles hold a lot of water. And the plants have enough time to suck that water in.

Even the drainage capability of garden soil is also moderate.

So garden soil with this capability will slowly kill the plant. That is why you need a different soil mix for both succulent and cactus. To know what’s the preferred soil, look into the next segment.

What Soil Mixture is Preferred for Succulents & Cactus?

Almost every gardener has their own preference of soil for succulents and cactus. It’s more like chefs debating on the perfect biscuit dough. Everyone has their preference by keeping the base ingredient the same.

This is the case for succulent and cactus as well. Whatever the soil recipe is, the base ingredient is the same. And the motive is to provide the plant with high drainage soil.

So that the water gets out of the pot through the drainage holes.

It is necessary because both the plants prefer medium to dry soil. They also have a high capacity to store water in their roots and stems. For example, succulents can suck water through roots only in a few seconds. And it can store water for up to a month.

Whereas cactus can store the water for 1.5 months. And it can suck water in a few seconds.

So the soil to keep these plants well needs to provide a good drainage system. Also, it needs to be in a condition that supports the plant physically. And it will keep little moisture and nutrients while passing the excess away.

What Happens if You Don’t Provide Succulent And Cactus with Proper Soil?

Well, you may fail to ensure whether the plant has  proper soil. In that case, the plant’s root will start to rot. Slowly, the whole plant will rot.

Without proper drainage, water will be stored in the soil. And the soil will be wet for a longer time.

Then it will start to rot. And then the cactus most likely have black spots. To prevent this, a good soil mixture is needed. To know that, just move to the next section.

How to Make Succulent And Cactus Soil?- Secret Recipe Revealed!

Making your own soil mix is beneficial for succulents and cactus. Because it’s cheaper than the ready-made one’s. As we said before, you can make it to your own preference.

So without delay, let’s tell you what ingredients are needed to make the soil mix.

The perfect soil mix for succulents and cactus includes three basic ingredients. Here we’ve given a brief introduction to each of them. Also, we’ve mentioned what alternative you can use for each of them.

It is the base ingredient for your soil mix. You can use any of the available indoor potting mixes for this. But make sure the one you’ve been using doesn’t have vermiculite. Because vermiculite will make the soil absorb more water rather than encouraging drainage.

You should always go for potting soil that doesn’t hold water. Because that’s the reason behind making your own soil mix. But you can get a little help choosing the right potting soil.

For that, we’ve mentioned our favorites down below.

These potting soils will offer you a proper drainage system. Just purchase them while they’re on sale if you have a budget issue. And then move on to the next ingredient.

The soil mixture that is sandy and porous is best for succulents and cactus. They thrive in this sort of mixture. While choosing sand, we prefer going for the coarse one.

Because we believe it to have less capacity for holding water. Whereas, finely ground sand has a higher capacity to store water.

But you may not want to buy coarse sand. Instead, you’re thinking of picking sand from beaches, garden corners, or even sandboxes. But that sand will be polluted and harmful for your plant.

Using this sort of soil mix can invite plant disease. Then you’ll see symptoms like your cactus plant suddenly turning purple.  So it’s better to avoid that sort of polluted sand.

If you’re actually up for an alternative of coarse sand,  go for a turface. Or you can use poultry grit instead. Both of them are similar to coarse sand. And they’re both good for drainage.

Perlite is the third ingredient in making soil mixture. It’s mostly confused with decorative stones because of its whitish outlook.

But it actually looks like styrofoam. Other than the looks, it’s actually good for succulent and cactus.

Because it retains a little amount of moisture only. It also prevents soil compaction, so the water drainage process gets faster. That is what you need for succulent and cactus.

Now let’s tell you about its availability. It is available in every garden center. Or you can look for these at home improvement stores. But you may want an alternative for perlite.

Then you can go for pumice. That is also good for your succulent and cactus.

To make the best soil for succulents and cactus, you’ll need some tools. So we listed them out for you-

Now get these tools and move on to the soil recipe.

Recipe for The Soil Mixture

Succulent and cactus need the same ingredients for the soil mixture. But the recipe is slightly different for both of them. It’s because cacti need better drainage than succulents.

So let’s see the recipes.

First, take the mixing bowl. And add 3 parts of potting soil to it. Then give 2 parts of coarse sand. After that add one part of perlite.  So part is a unit to express the ratio of ingredients.

For example, you’re measuring the ingredients with a cup. In that case, you need to take 3 cups of potting soil, 2 cups of coarse sand, and so on.

Now use the trowel and mix all the ingredients together. And the soil mixture is ready for your succulents.

Well, enough knowledge on that. Now move on to the cactus recipe.

The cactus recipe is almost the same. The only difference is the amount of perlite and sand.

So take 3 parts of potting soil. Then add 2.5 parts of coarse sand and 1.5 parts of perlite. Then mix them as you mixed the succulent soil. The mixture would be ready to use on cacti.

So here’s everything on what soil you can use with succulents and cactus. Hope you got your answer.

Question: How to store the soil mix of succulent and cactus?

Answer: You may have some leftover soil mix. Then just take an air-tight plastic container. And pour the mixture on it. Make sure to keep the bucket in a low-light place like a basement or garage.

Question: When to re-pot succulents and cactus?

Answer: Well, your previous pot might not have drainage soil. And that eventually caused root rot. In that case, you’ll need to re-pot the plant.

Question: When to fertilize succulents?

Answer: The best time to fertilize succulents is Spring. You’ll have to fertilize the plant in the daytime. But make sure that the temperature is above 60 degrees Fahrenheit.

What an informative article it was. Now you know whether you can use garden soil for succulents and cactus. Hope you enjoyed it as much as we did while writing it.