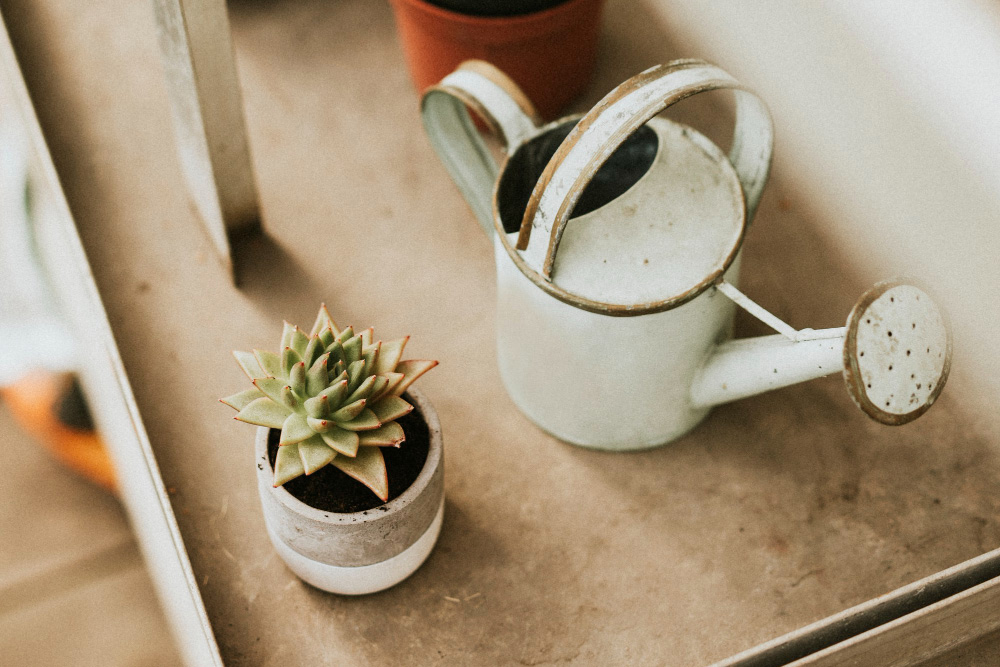 Your succulents used to be healthy but for some time, they’ve lost the vibrant look. They don’t seem to grow or thrive.

You’ve no clue what’s wrong with the plant, so you decided to repot it.

Now you’re thinking if you water succulents after repotting or before planting?

Well, you can water the plant before repotting. But it should be at least 7 days earlier. So that the plant can dry up in between the watering. Because this is what the plant needs after replanting. You have to wait for 7-10 days after that to water it again.

So the whole re-potting process is tricky. You’ll need a guide on that. That’s why we’re here to help.

Why Do You Need to Re-pot The Succulents?

Succulents have a tendency to grow every 2 years. As they’ve increased in size, the current pot won’t fit them.

Moreover, when succulents stay in one pot for a long time, the roots can’t achieve growth. Because the root feels trapped in the same place without movement.

By then the soil particles start to break. Some particles even lose their ability to work. For example, the soil might lose its capacity to drain properly.

Or perlite used in the soil might have become lighter. It floats when you water the plant.

The soil may have lost its ability to hold a little amount of moisture. As a result, the succulent might die due to a lack of water. So it’s important to re-pot the succulents before or in between every 2 years.

Other than that, sometimes the plant’s roots get rotten. Then you’ll have to re-pot the plant in order to keep it away from the moist soil.

You may also need to re-pot the plant if the soil develops fungus or molds.

So that the plants can again thrive and grow to the fullest.

When to Re-pot The Succulents?-Signs Explained!

So you know that repotting is needed. But you’re not sure when exactly it’s time to re-pot.

Thus, we’ve presented which signs you need to observe.

So the plant is under a lot of pressure. Because it can’t suck water and nutrients. As a result, the plant starts to die a bit every day.

The roots of the succulent will become stiff and tightened. It would stick out of the pot through the drainage holes.

This is when you need to re-pot to save the root and restore the plant’s health.

Another thing you’ll notice is the change in the drainage system. The soil may dry out completely in a few hours of watering. Because the soil is passing out all the water through the drainage holes.

While doing that it’s failing to keep some minimum moisture for the plant.

Also the opposite might happen. The soil may lose its drainage ability. So when you water and come back after a few hours, you see the soil wet. And there’s standing water on the pot.

If you’ve been encountering standing water for a few days now, then the roots are in danger. Because they’ll start to rot.

Mold or Fungus in Soil

Molds tend to form in damp soil. If you have noticed little white spots growing on the soil, consider it as mold. It’s mainly due to fungus.

It spreads quickly to the entire soil and then to the plant. So if you’ve noticed mold buildup, consider it as an emergency sign. And start the re-potting process.

Do the same if you assume that the plant has rotten roots.

Now, let’s tell you how to re-pot the plants. But before that let’s clear out your confusion on watering.

Do You Water Succulents After Repotting or Before Planting?

You can water the plants 5-7 days before replanting. Just make sure that when you re-pot it, it’s completely dry. And there shouldn’t be any moisture or water left on it. Because the roots need to be adjusted on the dry soil first.

After replanting, wait for 7-10 days. And then start to water the plants normally. If you water right after the plants have been repotted, it won’t adjust properly.

And the succulent will be overwatered. This defeats the purpose of repotting, as the plant can die.

It is not hard to re-pot your succulents. In fact, it’s quite easy. And here’s less chance of you messing up. But still, you have to be careful enough not to harm the plant while repotting.

And maintaining proper steps are required here. So that the whole process gets a lot easier.

But first, look for the tools that you’ll be needing. Those are-

Now collect these items from any home improvement store or nursery. But while choosing the gardening tools, it’s efficient to buy a whole set. Because under that one packaging you’ll have all the tools needed.

We’ve got two different gardening tools set for you. We love to alternate between these two. You can also look for these while visiting the shop.

So you’ve got all you need to start re-potting. Now let’s jump into the steps.

You can use a store-bought succulent or cactus mix as the soil. Or you can make your own. We prefer making your own soil because that gives you control over ingredients.

If you are up for making your succulents soil, then we have the recipe. Take 3 scoops of potting soil and 2 scoops of coarse sand. Then mix it with 1 scoop of perlite.

Finally, mix all of them together. But don’t think of including garden soil. Because garden soil isn’t a good choice for succulents.

Now take the soil mixture and fill 80% of the pot with it. The pot should have holes underneath it for drainage. Also, select a pot that’s 2 inches wider than the plant. So that the plant can grow and breathe.

And the pot is ready for the next step.

Step 2 of 4: Take The Plant Out of The Current Pot

Now it’s a tricky part. Because while removing the plant, you need to be careful enough. So first, dig in the soil. And try to remove soil nearer to the root area. Now slowly shake the plant.

And then poke some of the soil that’s holding the roots with a toothpick. Or you can use your fingers. Now try to gently loosen up the plant and pull it out.

Step 3 of 4: Prepare The Plant for Re-potting

Now your plant may have some black, dark brown leaves or root strings. Those are the damaged leaves and root strings.

You can just cut them off with scissors. And brush away any soil particles or dirt in the plant. You can brush off attached soil to the roots. Or you can water the roots to let the soil wash away.

If you use water, then you have to keep the plant at room temperature. Then wait for the next 3-5 days. Just lay the plant over a newspaper. And wait for the plant to dry. To understand if it’s dry, simply just touch it.

Once it’s completely dry, you can re-pot it.

For this, dig the soil on the new pot all the way down. Then place the plant there carefully. Now cover the roots all the way to the stems with soil. But don’t cover any of the leaves.

Now let the plant get used to its new pot. You can then water it after 7-10 days. Then carry on with regular watering. And dry the soil completely before each watering.

Question: When can I decorate the soil after replanting succulents?

Answer: After you re-pot the plants, give them some to adjust to the new pot. Wait for 10-15 days for the plant to get stable on its new pot. Then put decorative stones on the upper part of the soil.

Question: What is the dormant period for succulents?

Question: Can I re-pot the succulent on its dormant period?

Answer: No, you shouldn’t re-pot the plant in its dormant period. Because then the plant will remain inactive. Letting the plant get used to the new pot and grow will go in vain.

It’s the end of our article. Hopefully, you’ve learned if you should water succulents after re-potting or before replanting.

If you still have questions, just comment down below. You don’t have to think twice before repotting.